Before I get to the concert and the meet & greet, I want to talk about a few things first so that hopefully readers and fellow fans know where I’m coming from (and possibly where the band members are coming from.) The actual concert will be the next text post to focus on the band meet.

I am a very humble person. I a m so grateful for what and who I have in my life.  I’m not rich or part of the one percent, but I have so much, things that people can only dream to have. I have a home, I have family and friends who love me. I even have decent health. I struggle with learning as well as with openness, and life and general, but I appreciate all that I have and gone through, especially this past year. Bearing that in mind, I am so thankful that I went to the Nightwish concert last night and that I got to meet the band. Waiting four hours before the doors opened, and in the cold and wind, was nothing. Everything was worth it.

I met some interesting people, as a person often does with fellow metal and rock fans, got some video and pictures, and even got a few story ideas for my own fiction. Overall it was a good Tuesday night. So when the meet & greet began; I was excited. The only nerves I felt were from the fans that did not get VIP passes. As fans we met Nightwish in groups of 3—4. Of the group I was in I was the last to meet them, perfectly fine though. And for months I knew I’d give Tuomas a thank you note/doodle and it went well. I shook hands with Tuomas, Troy, Floor, Kai, Emppu, and Marco. (I told Tuomas that I was really thankful for this, his music, and how I listen to his music when writing my own stories. At floor I also thanked were for Wild Card and that it helped with my own depressive episode. And at Marco I said I love his growls.)

My impression was that every member is sweet and humble and their kind hearts make them all the more beautiful. None were “racist”, “sexist,” or an “arrogant bitch.”  It just that with Tuomas and Floor there’s a certain reserve to them. Tuomas a shyness tendency and Floor an almost protective aura about her.

I say this because anyone who’s gone through this sees it in others more easily. I used to be incredibly shy, and at this point it’s merged into a sort of introversion instead, my shyness still pops up at times. Tuomas was amicable but even as a man there was a lowness to his voice; a voice that said, “Meeting people is great but take it slow. You can do this.”

Most shy, former shy, anxious-ridden people know how shyness affects them and how it makes them look to others. If you fall into that category you’re typically seen as conceited and distant when it’s just your quietness taking over. So most go into creative fields where they can easily be open and their nerves don’t get the best of them. Though it does excuse it, the open letter makes sense now, sense being shy you don’t want your words, your feelings to be a burden on others; beloved ones or strangers.

As for the fans’ perception of Floor, shyness appears to have nothing to do with this. Like Tuomas was open with the depression he had in his early years; Floor was just as open with her burnout. (Since burnout and depression intertwine so much I won’t go much into that aspect.) Most people who have gone through a mood, mental, or physical illness, tend to be cautious, even after several years of recovery. Floor, like most, will take precautions to make sure she won’t end up in that state again. That could be taking introduction slower more leisurely than someone who hasn’t gone through this kind of rough patch.

These are just some of the reasons I defend these members. The band DOES NOT owe us a meet & greet, a photo, an autograph, a hug, etc. The most they owe fans is a performance. Just like they know that fans DON’T HAVE TO pay for merch, for albums, tickets or anything. It’s our choice, just like it’s theirs. Since they have done pre-show meetings, the least both sides can do is offer a handshake, smile, and kind word. That’s all.

Although I think was helped me was my sweet, silly side of my humor when it comes to meeting any new person. When it came to handing my phone over for a photo I’m saying, “Dude who do I hand my phone to? This man? This staff member? I’m confused.” They all look the same. Photo went well and I said a last word that, “I bet you’ll kick ass.” “Thanks we try,” from Floor. (Got a chuckle from Marco and Floor too.)

I do realize that this won’t change anything. Everyone has the right to their opinion. I want to leave my readers with the fact that you shouldn’t take experiences at face value. Don’t base your impressions on cultural difference or one-time memories.

I love you all and wish you the world of understanding and beauty, as well as happiness. 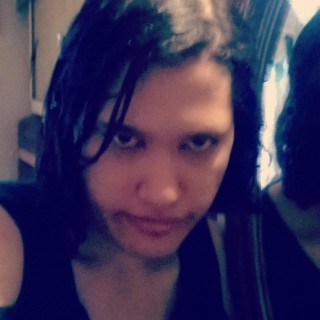 Sarah - Hufflepuff with Slytherin tendancies. 24. I'm an artist, a fiction writer, and a nerd. I love music, reading, and horror films. I'm made of the sweetest whiskey, heavy metal, and sarcasm.

Oh lord, heaven knows we belong way down below. #mine #theprettyreckless #collage #taylormomsen #art #goingtohell #whoareyousellingfor
I've been a little obsessed with the game dream daddy lately, particularly Damien, Mary, Amanda Ann, and Lucian. #watercolor #coloredpencil #mine #myart #dreamdaddy #amandaann #lucianbloodmarch
That's what a paralyzed vocal fold/cord sounds like. But have I always sounded like that?
So I was binge watching the x-files and after 3 seasons I remembered Disney did have a x-file like show before Gravity Falls. So I decided to do a fanart in coloured pencil on black canson paper. Fi "Fiona" Phillips (Cara Delizia) and Annie (Alexz Johnson) were the protagonists drawn to the paranormal as they traveled across Canada and the United States hunting ghosts, aliens, vampires, etc. With Mackenzie Phillips as the rockstar mom -- singing actuall rock music -- Fi tried tho solve the Paranormal murder of her father. (Very similar to Fox Mulder craving answers about his alien abducted, then cloned, younger sister.) while you can watch so weird in YouTube, if you can it's better to order the DVD from Canadian Disney channel. #thedisneychannel #disneychannel #disney #soweird #myart #myfanart #caradelizia #alexzjohnson #art #colourpencil
Neighborimg Xmas houses during work travelling
The trio of horses that belong to my coworker. #horses #winter
Totally want this 1979 truck
Sunset
A cat wandered into the yard.despite being allergic it chased and ate the mice away.
Fire and symphonic death metal goes well together. #mine #photoshop #alissawhitegluz #floorjansen

Eluveitie – A Rose For Epona